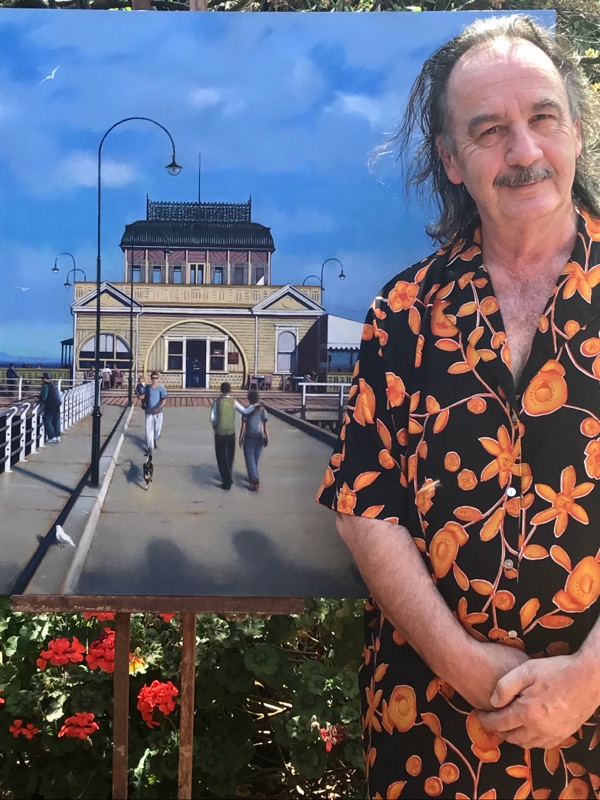 More than 300,000 migrants came to the Bonegilla Migrant Camp, which opened its gates in 1947 in northeastern Victoria. Frankston North jazz musician and artist Hermann Schwaiger was one of them. He was 13 when he arrived in Bonegilla with his family, who had sailed by ship from post-war Germany to a far-off world where mess huts with unlined timber frames and toilet blocks must have looked particularly strange, like ugly wooden time capsules baking beneath the Albury/Wodonga sun. No more Eastern Alps; no more medieval and baroque buildings. So, this was home.

Hermann explains. “We loved our time at Bonegilla  — all exotic, such as big gum trees, hot weather and licence-free fishing under the age of 16. We were only there for a month and then moved to Maribyrnong, then Ascot Vale and eventually to Kinglake. We — I have three brothers and a sister — lost our old house in the Black Saturday bushfires in 2009. We lost people too. I used to work in my grandfather’s music shop, which was on the German side of the border only 4km from Salzburg in a town called Freilassing. He made accordions, which he exported across the world, and he also played in the Edelweiss Trio. My mother studied opera singing in Salzburg and my father wanted to be a classical pianist but the war came along. I’ve probably been playing jazz for around 40 years. The music was always there.”

The Bonegilla camp ceased operation in 1971, but Hermann has never stopped creating. He has played with the best of them since taking up double bass in the ‘70s after coming out of the Fine Arts Department at RMIT when he formed the Hermann Schwaiger Quintet. Then there was the Chris McNulty Quintet playing double bass, the year he spent playing with pianist Paul Grabowsky and acclaimed drummer and percussionist David Jones, and jazzing it up with the likes of Vince Jones, Jane Clifton and Wilbur Wilde and touring with the Cathay Pacific Band in Hong Kong. In between came painting workshops at Kinglake and Somerville. He continues.

“I began painting about 20 years ago. I use acrylics to paint Melbourne streetscapes and the people in them. I suppose it’s about documenting life as it is now and being representational. I just like doing it. I’ve shown my work in the Derinya Art & Craft Exhibition, Camberwell Art Show, Flinders Art Show and have just been in the 40th annual Mount Eliza Art Show.”

Life has taken many melodic twists and turns for this music and art expressionist who is looking forward to a future filled with more of the same creation. From Salzburg to Frankston North, his double bass and paint brushes will continue to tell their stories of his deep connections with the world around him. Whether far away or just around the corner.